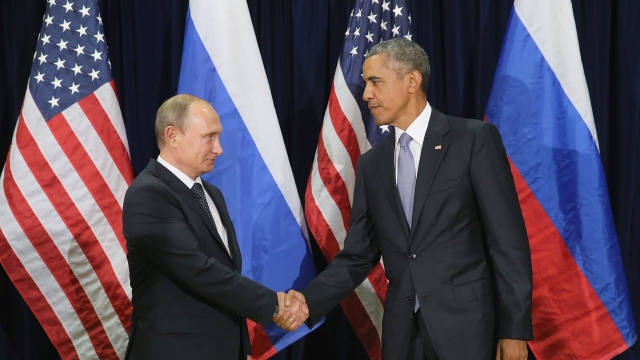 The U.S. is ejecting dozens of Russian intelligence officials over suspected Russian cyberattacks.

President Barack Obama is booting Russian operatives out of the United States in response to Russia's suspected tampering in the presidential election and other cyberattacks.

Obama promised to retaliate after intelligence agencies determined the Russian government was responsible for hacking and leaking information from the Democratic National Committee.

He announced sanctions against specific Russian operatives thought to be responsible for other hacks that stole millions of dollars from U.S. businesses and universities.

Obama is also taking actions over alleged harassment of U.S. personnel in Russia. Thirty-five U.S.-based Russian personnel will have until Dec. 31 to get their stuff and get out of the country. Two of Russia's U.S. compounds will also be shut down.

This could put Donald Trump in an awkward position. He's consistently deflected the Obama administration's claims that Russia interfered to get Trump elected.

The day before the sanctions were announced, Trump said: "I think we ought to get on with our lives. ... The whole age of computer has made it where nobody knows exactly what is going on."

But now the White House plans to publicize information from the National Security Agency and the Department of Homeland Security that implicates Russia. That could mean Trump will either have to backtrack or publicly doubt the credibility of intelligence agencies he's about to run.

When Obama first announced his intention to sanction Russia, he also said there would be some actions the U.S. takes that are never publicized.