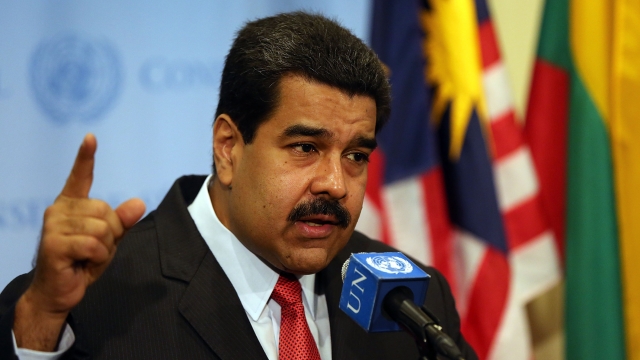 The Trump administration announced sanctions against Venezuelan President Nicolás Maduro and Venezuela's oil industry Monday, less than a week after President Donald Trump took the stance that Maduro is not Venezuela's official leader.

National security adviser John Bolton and Treasury Secretary Steve Mnuchin said at a press briefing the U.S. will sanction Venezuela's state-owned oil firm, PDVSA. The oil company is a primary source of income for Venezuela, and as of Monday, people living in the U.S. are barred from doing business with it.

"The path to sanctions relief for PDVSA is through the expeditious transfer of control to the interim president or a subsequent, democratically elected government who is committed to taking concrete and meaningful actions to combat corruption," Mnuchin said.

The White House is implementing these sanctions because it believes it will help force Maduro, who's widely considered a dictator, out of power. The sanctions could undermine the Venezuelan military's loyalty to him, which he's secured, in part, by offering leaders a share in oil profits.

In a statement Monday, U.S. Sen. Marco Rubio said, "The oil belongs to the Venezuelan people, and therefore the money PDVSA earns from its export will now be returned to the people through their legitimate constitutional government."

Any money U.S. entities make from Venezuelan oil purchases will be put into blocked accounts. Bolton said the move will hold back about $7 billion in assets and result in more than $11 billion in lost assets over the next year.