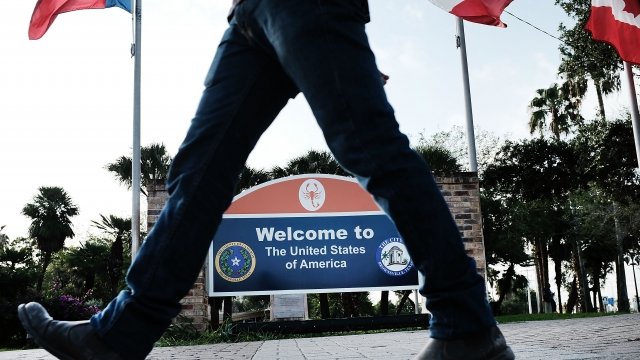 SMS
US Resettled Fewer Refugees Than The Rest Of The World In 2017
By Ethan Weston
By Ethan Weston
July 6, 2018
The rest of the world more than doubled the U.S. refugee resettlement numbers.
SHOW TRANSCRIPT

The U.S. resettled fewer refugees than the rest of the world combined in 2017. It's the first time that's happened since the 1980 U.S. Refugee Act was adopted, according to the UN and Pew Research Center.

According to Pew the U.S. resettled about 33,000 refugees in 2017, which puts that year's rate around post-9/11 levels. The rest of the world resettled more than double that amount in 2017 but no single country surpassed the U.S. in resettlements.

And 2018 is on track to be another low year. The Trump administration set a cap of 45,000 refugee admissions for fiscal year 2018. State Department data shows the U.S. has admitted just over 16,000 refugees so far with about three months left in the fiscal year.