US Reporter In Iranian Jail Charged With Espionage 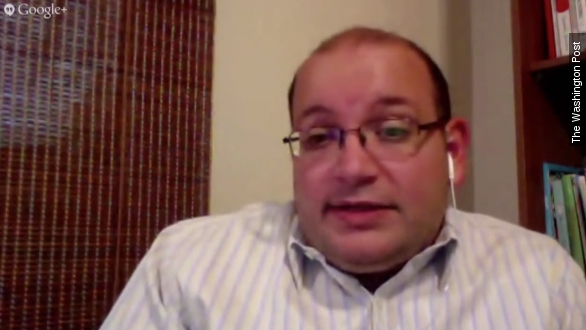 SMS
US Reporter In Iranian Jail Charged With Espionage
By Matt Picht
By Matt Picht
April 20, 2015
Details of the charges against Jason Rezaian, the Washington Post reporter who's been jailed in Iran since July 2014, have now been publicized.
SHOW TRANSCRIPT

Jason Rezaian, the Tehran bureau chief for The Washington Post, has been held in an Iranian prison for almost nine months. Only now have we learned what he's being charged with.

The charges against Rezaian still haven't been officially disclosed, but Ahsan was allowed to read the indictment against her client during a 90-minute meeting with Rezaian on Monday.

That meeting is believed to be the first substantive discussion Rezaian has had with an attorney since his detention on July 22, 2014. He's currently awaiting trial in Tehran's Evin Prison and could face a maximum sentence of 10 to 20 years behind bars if convicted on these charges.

The Washington Post's executive editor Martin Baron reiterated his call for Rezaian's release Monday, writing the charges "could not be more ludicrous. It is absurd and despicable to assert, as Iran's judiciary is now claiming, that Jason's work ... posed any threat to Iranian national security." (Video via International Center for Journalists)

Rezaian's case could benefit from a recent thaw in U.S.-Iran relations. The two countries recently agreed to a framework deal over Iran's controversial nuclear program, and the White House repeatedly called for Rezaian's release during those negotiations.

However, the judge assigned to Rezaian's case has a reputation for harsh sentences; he's been cited by multiple activist groups and sanctioned by the European Union for human rights violations.

A court date has not been set for Rezaian, but his family told The Post the trial could happen soon.