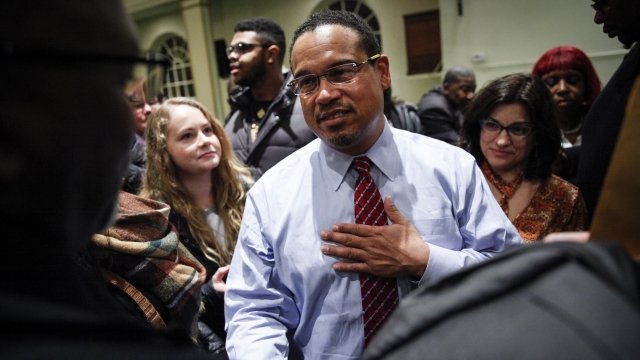 SMS
US Rep. Keith Ellison Denies Allegations Of Abuse
By Katherine Biek
By Katherine Biek
August 13, 2018
Ellison, who's running for Minnesota attorney general, was accused of abusing a former girlfriend by the woman's son.
SHOW TRANSCRIPT

U.S. Rep. Keith Ellison is denying an allegation that he once abused a former girlfriend.

Over the weekend, Karen Monahan's son wrote on Facebook that he'd seen a video of Ellison dragging his mother off a bed while screaming profanities at her. Monahan then wrote on Twitter, "What my son said is true."

In a statement released Sunday, Ellison said, "This video does not exist because I have never behaved in this way, and any characterization otherwise is false."

The Democrat has served six terms in the House and is currently running for Minnesota attorney general.

Ellison is also the deputy chair of the Democratic National Committee. It did not respond to Politico's request for comment.