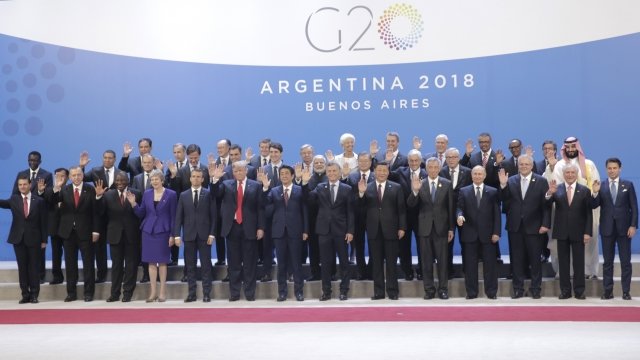 SMS
The US Stands Alone Among G-20 Nations When It Comes To Climate
By Ethan Weston
By Ethan Weston
December 2, 2018
G-20 nations account for about 80 percent of the world's greenhouse gas emissions.
SHOW TRANSCRIPT

Every G-20 nation reaffirmed their commitment to the Paris Climate Change accord except one: the U.S.

The group of 19 nations plus the European Union met in Argentina last week to discuss issues facing the world like trade, climate change and sustainable development.

In the summit's final declaration, the group agreed to reform global trade but the document said "the United States reiterates its decision to withdraw from the Paris Agreement."

But according to a report released last month, none of the other 19 members who reaffirmed their commitments to the accord are on track to meet the Paris agreement's goal of keeping warming below 2 degrees Celsius above pre-industrial levels.

G-20 countries are responsible for 80 percent of the world's greenhouse gas emissions, according to the World Resources Institute.