US Temporarily Pulls Forces Out Of Libya Amid 'Increased Unrest' 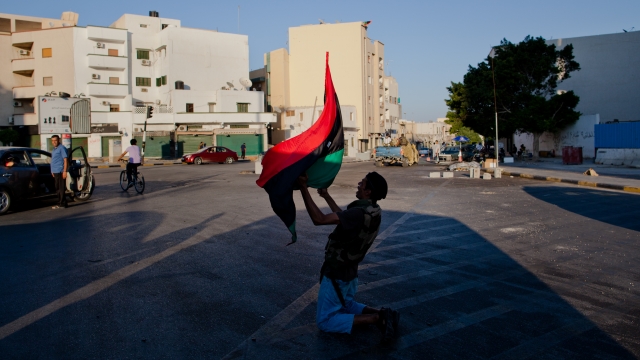 SMS
US Temporarily Pulls Forces Out Of Libya Amid 'Increased Unrest'
By Katie Cammarata
By Katie Cammarata
April 8, 2019
U.S. Africa Command announced it's temporarily pulling a contingent of forces from Libya while it continues to keep an eye on the situation.
SHOW TRANSCRIPT

The U.S. is temporarily relocating a contingent of troops from Libya "due to increased unrest" in the country.

U.S. Africa Command made the announcement in a statement early Sunday. The forces are in Libya to help support diplomatic missions, counter-terrorism activities and improve security across the region. The command said it would continue to watch the situation in Libya and "assess the feasibility for renewed U.S. military presence, as appropriate."

Libya has faced violence and political instability for years.

And that increased last week when General Khalifa Haftar's so-called Libyan National Army started trying to take control of the country's capital. The LNA reportedly launched air strikes against the UN-backed forces in the southern part of the city.

Libyan Prime Minister Fayez al-Serraj accused Haftar of staging a coup and said he would protect the capital.

Libya's government says at least 21 people have died and dozens more have been injured in the recent fighting.

The UN had previously called for a ceasefire to evacuate civilians and those injured, but that didn't happen.

Secretary of State Mike Pompeo called for an "immediate halt" in the military operations against the capital, urging for "political negotiations" instead.