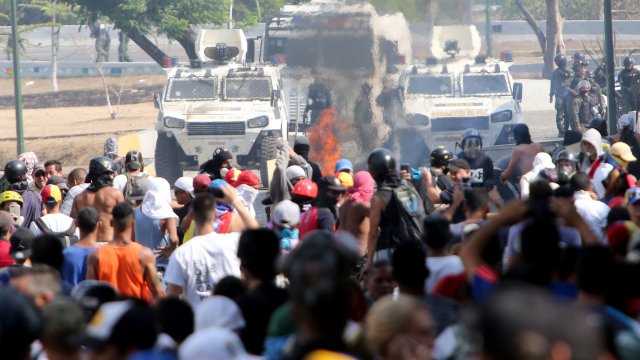 SMS
US Ramps Up Pressure On Russia And Cuba To Stop Backing Maduro
By LeeAnne Lowry
By LeeAnne Lowry
May 2, 2019
The U.S. blames the political standoff in Venezuela on Cuba and Russia's involvement in the embattled nation.
SHOW TRANSCRIPT

The U.S. is increasing pressure on Cuba and Russia to stop backing Venezuelan President Nicolás Maduro.

There's a lot to unpack here. For starters — the U.S. is blaming the political standoff in Venezuela partially on the presence of Cuban troops.

U.S. National Security Adviser John Bolton said: "The key point here is that if, this afternoon, 20,000 to 25,000 Cubans left Venezuela, I think Maduro would fall by midnight. It's this foreign presence that sits on top of the military, sits on top of the government, that makes it impossible for the people's voice to be heard."

President Donald Trump threatened a complete embargo and sanctions against Cuba if it doesn't withdraw troops from Venezuela — but Cuba denies having any troops there in the first place.

Johana Tablada, a Cuban Foreign Ministry official, said: "It is impossible to withdraw un-existent troops. There are no Cuban troops in Venezuela."

The U.S. alleges Cuba has troops there as a "surrogate" for Russia.

Bolton said: "They'd love to get effective control of a country in this hemisphere. It's not ideological. It's just good old fashioned power politics. That's why we have the Monroe Doctrine, which we're dusting off in this administration."

The Monroe Doctrine, an 1823 U.S. policy on colonization in the Western Hemisphere, has come up a few times throughout American history. The last time it was used also involved the former Soviet Union and Cuba. President John F. Kennedy invoked it symbolically in 1962 during the Cuban Missile Crisis.

The U.S. says it has spoken with Russia's foreign ministry, but it's unclear what the plan is moving forward.

Bolton said: "Those conversations are going to go on, but we're not going to limit ourselves to conversations. We're taking steps, we're putting more pressure on the Maduro regime."