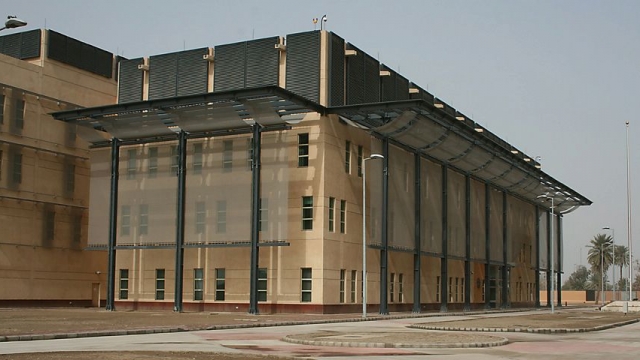 The State Department has ordered all non-emergency U.S. government employees to leave Iraq.

The agency told U.S. personnel at the embassy in Baghdad and the consulate in Erbil to leave the country "as soon as possible" and "avoid U.S. facilities within Iraq." It didn't say why it was ordering the partial evacuation.

But it could be because tensions between the U.S. and Iran are high. Secretary of State Mike Pompeo said last week the Trump administration got word that there was activity in Iran that put American facilities and personnel at "substantial risk."

The U.S. sent an aircraft carrier strike group and bombers to the Middle East in response to "troubling and escalatory indications and warnings" from Iran.

Around that time, Pompeo made a surprise trip to brief Iraq's president and prime minister. During the meeting, Pompeo told the country's leaders that Iraq needed to protect U.S. troops and citizens there. He told reporters after the talks that the two leaders "provided assurances that they understood that this was their responsibility."

On top of all of that, Iran has threatened to stop complying with some parts of the 2015 Iran nuclear deal. President Hassan Rouhani gave the remaining parties in the agreement 60 days to help reduce pressure put on Iran by U.S. sanctions. The EU and Russia have reaffirmed their commitment to the deal. The Iranian Students' News Agency said Wednesday the country was starting to roll back some of its nuclear commitments.