$25 Million: That's Now The Reward For Info On ISIS' Leader 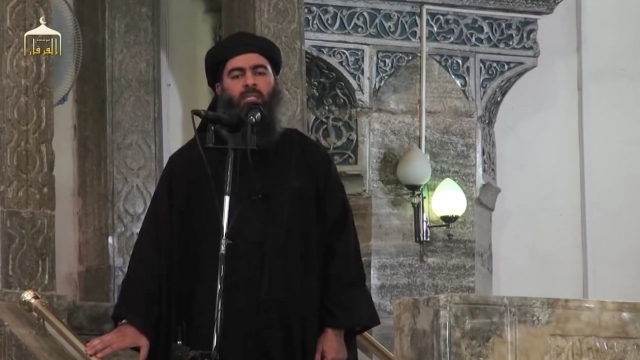 SMS
$25 Million: That's Now The Reward For Info On ISIS' Leader
By Jake Jones
By Jake Jones
December 17, 2016
The U.S. State Department more than doubled its reward for any information that leads to Abu Bakr al-Baghdadi, the leader of ISIS.
SHOW TRANSCRIPT

The reward for any information leading to the leader of ISIS is now at $25 million.

Abu Bakr al-Baghdadi is the self-proclaimed "caliph" of ISIS.

In 2011, the State Department set the reward for information that led to his location or arrest at $10 million. Since then, he's seemed to stay one step ahead of U.S. intelligence.

That could be because al-Baghdadi is incredibly secretive. Top ISIS leaders communicate with him through handwritten letters or in-person meetings. Even then, he's known to wear face coverings.

The push to find al-Baghdadi comes as U.S. and local forces close in on ISIS, retaking much of Mosul — ISIS' last stronghold in Iraq — and Palmyra in Syria.

The U.S. also said in early December it would deploy more troops in the push to retake the Syrian city of Raqqa, the focal point of ISIS territory.