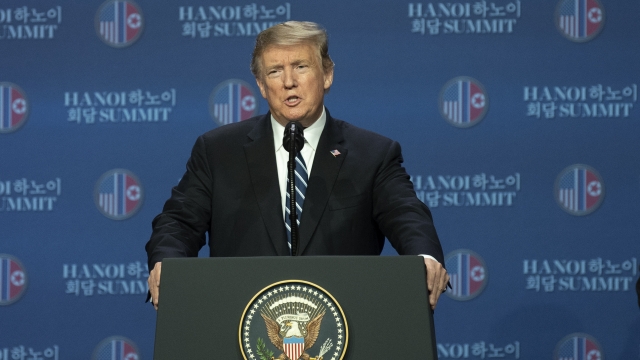 "He has a certain vision and it's not exactly our vision, but it's a lot closer than it was a year ago and I think, you know, eventually we'll get there, but for this particular visit, we decided that we had to walk," said U.S. President Donald Trump.

Ahead of the summit, experts predicted President Trump might offer to ease economic sanctions against the North in an effort to coax the country into giving up its nuclear weapons program.

According to President Trump, Kim offered to close one nuclear facility in return for the U.S. calling off sanctions.

President Trump said, "They wanted the sanctions lifted in their entirety and we couldn't do that. They were willing to denuke a large portion of the areas that we wanted but we couldn't give up all of the sanctions for that. So we continue to work and we'll see."

He also said Kim told him he'd stop all nuclear testing. The president said he'd "take him at his word."

The U.S. canceled a scheduled "Joint Agreement Signing Ceremony" on Thursday. There are no scheduled plans for another summit with North Korea, but U.S. leaders have remained optimistic.

U.S. Secretary of State Mike Pompeo said, "Our teams have gotten to know each other better. We know what the limits are. We know where some of the challenges are. And I think as we continue to work on this in the days and weeks ahead we can make progress so that we can ultimately achieve what it is that the world wants, which is to denuclearize North Korea and reduce risk for the American people and people all around the world. "