Bodies Recovered From The USS Fitzgerald After Collision At Sea 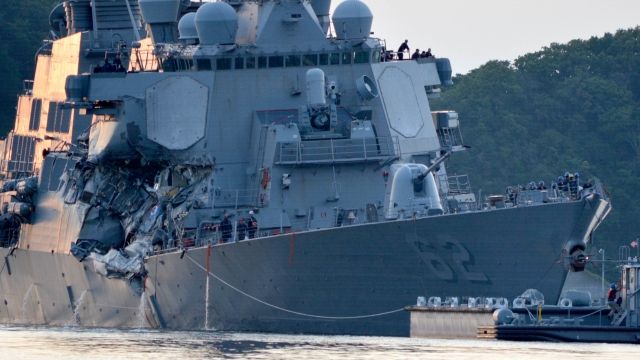 Seven sailors were reported missing after a collision between a U.S. Navy destroyer and a merchant vessel off the coast of Japan.

The U.S. Navy found "a number" of bodies after seven sailors went missing after a collision with a merchant vessel.

The USS Fitzgerald and the civilian ship collided at 2:30 a.m. local time Saturday, causing damage to the Fitzgerald's forward starboard side. It's unclear what caused the collision.

Secretary of Defense Jim Mattis confirmed that President Donald Trump gave him the authority to set troop levels in Afghanistan.

Search and rescue teams found the bodies in the damaged areas of the ship that flooded after the crash.

The Navy did not say if any of the missing sailors survived. Officials will release the names of those killed after all their families are notified.

Three members of the missile destroyer's crew, including its commanding officer Cmdr. Bryce Benson, were injured and medically evacuated off the ship.

Both Japanese and American officials are investigating the cause of the collision.