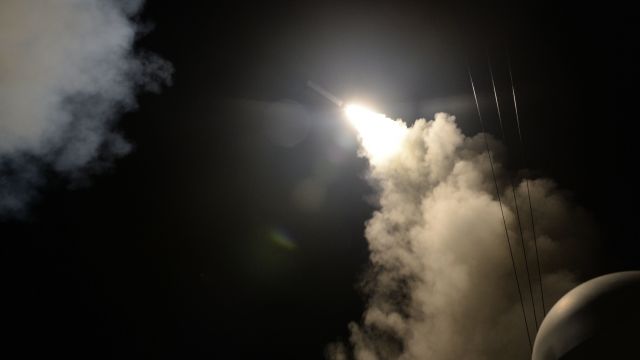 SMS
Here's How Much Damage US Missiles Did To A Syrian Air Base
By Matt Picht
By Matt Picht
April 7, 2017
U.S. strikes did plenty of damage at a Syrian airfield but didn't take it out of commission completely.
SHOW TRANSCRIPT

Satellite photos released by the U.S. military show the extent of the damage Thursday's missile strikes did to Shayrat Airfield in Syria.

Fox News reports about 20 Syrian jets were destroyed in the attack, along with many hangars and other facilities. Syrian media reports at least seven soldiers were killed and nine wounded.

The attacks didn't put the air base out of commission. The Syrian Observatory for Human Rights reports airstrikes were launched from Shayrat Airfield the day after the attack.

But according to President Trump, the attack was more about deterring chemical weapon use than disabling Syria's air force. The threat of U.S. force might dissuade the Syrian regime from launching another major chemical weapons attack like the one that prompted Thursday's strikes.

Then again, several reports of chemical weapons use on a smaller scale went largely ignored by the White House before Thursday's strike. The regime might just have to tone down its attacks to avoid a U.S. response.