US May Shift Missile Defense Focus To Russia, China 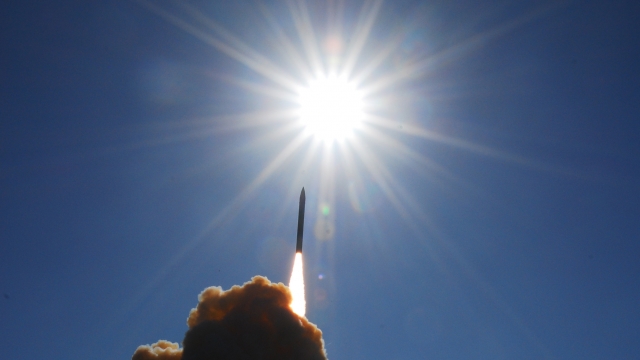 The U.S. ballistic missile defense program has traditionally been focused on stopping nuclear weapons from smaller states like North Korea. That might be about to change.

The 2019 Missile Defense Review, mandated by Congress back in 2016, explicitly considers Russia and China among the nuclear-armed adversaries missile defense is aimed at deterring attacks from. That's a far cry from the last review in 2010, which stated that the U.S. missile defense program "does not have the capacity" to thwart an attack from Russia or China, and "is not intended to affect the strategic balance with those countries."

Relations between the U.S., Russia and China have gotten markedly worse since 2010. But U.S. missile defense capabilities still face the same challenge they did back then — scale.

Right now, the U.S. has 44 ground-based missiles that can potentially intercept an intercontinental ballistic missile, and plans to add 20 more interceptors by 2023. But Russia has over 1,000 nuclear warheads available to be deployed on over 300 ground-based missiles alone. An all-out missile attack by Russia could give the U.S. too many targets to take down.

Even in a limited attack, accuracy is still a problem. The U.S. ground-based interceptor system went four for seven on the most recent tests of whether it could successfully intercept a missile.

And the more the U.S. focuses on missile defense, the more other countries invest in thwarting those defenses. Russian President Vladimir Putin has cited U.S. missile defenses as a key motivation for developing more advanced nuclear weapons.

The new missile defense review suggests the U.S. might turn to space to counter these problems; it notes the Department of Defense is undertaking a new analysis to study the viability of space-based missile interceptors. A 2012 study by the National Research Council found even the cheapest version of such a system would cost around $300 billion over the course of its life.