The US And Afghanistan Are Fighting 2 Enemies At Once 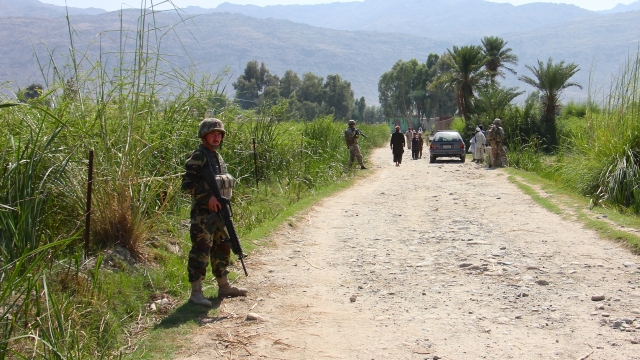 The war against ISIS and the Taliban in Afghanistan might be heating up.

Afghan and U.S. troops have been making headway against ISIS in Afghanistan.

On Monday, airstrikes destroyed an ISIS radio station that was broadcasting terrorist propaganda.

And on Sunday, military officials from both countries confirmed the leader of ISIS in Afghanistan was killed — the second ISIS leader killed in the country in nine months.

And Secretary of Defense Gen. Jim Mattis worries that, while ISIS might be on "their back foot" in Iraq and Syria, they've got some strength still in Afghanistan.

The most recent spending bill from Congress locks away almost $2.5 billion in military funding until President Trump presents a plan to defeat ISIS.

There could be an influx of troops to the country soon, though. The Washington Post reported Monday that the Trump administration is considering expanding military action in the country to fight the Taliban.

The U.S. has been in Afghanistan since 2001, when American troops overthrew the Taliban regime that was in power at the time. But the Taliban has been making a comeback in recent years.

A military expansion would allow the Pentagon, instead of the White House, to set the number of troops engaging in Afghanistan. It would also free up the Air Force to strike a wider range of targets.

One official told The Washington Post that the new plan is the result of a policy review aimed at getting America to "start winning" again.

Any change in the U.S. strategy in Afghanistan would have to be signed off on by President Donald Trump. He's expected to make his decision sometime before attending a NATO meeting later this month.