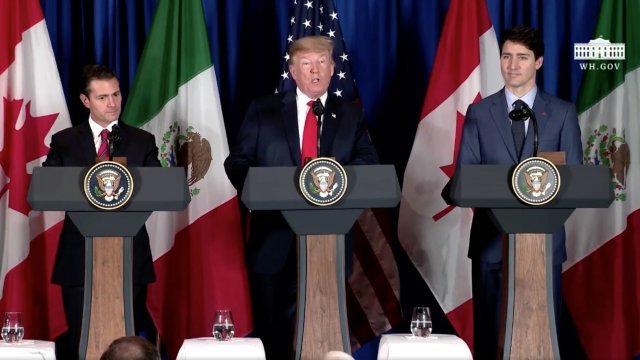 "This has been a battle, and battles sometimes make great friendships, so it's really terrific," said Trump.

The leaders of the three neighbor countries signed the new U.S.-Mexico-Canada Agreement, or USMCA, on Friday at the G20 summit in Buenos Aires, Argentina.

The move is a win for Trump who promised during his campaign to replace NAFTA. He called the deal a "model agreement that changes the trade landscape forever."

The deal also forces Canada to change its milk pricing to help the U.S. with dairy sales in Canada and other countries.

And it address unfair currency practices by requiring each country to avoid exchange rate manipulation.

Canadian Prime Minister Justin Trudeau said the deal "is a major step for [the country's] economy," but that "There is much more work to do in lowering trade barriers."

That's because the deal didn't eliminate steel and aluminum tariffs on Canada and Mexico. Trump enacted those tariffs earlier this year, with both countries retaliating with tariffs of their own on American goods.

The deal will now head to each country's legislature for approval. It's unclear if Democrats, who will soon control the U.S. House, will help push it through Congress.