Fewer Migrants Are Crossing The US Border. So Why Are More Dying? 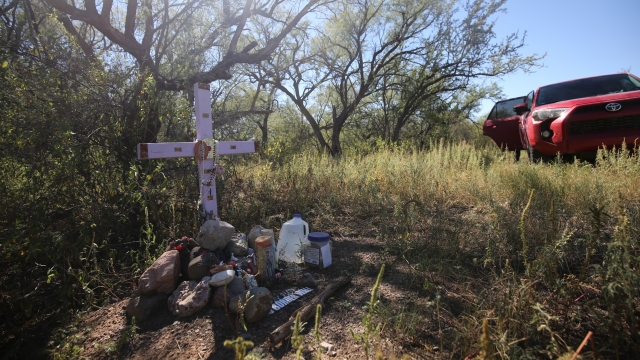 SMS
Fewer Migrants Are Crossing The US Border. So Why Are More Dying?
By Zach Toombs
By Zach Toombs
October 21, 2016
The U.S. put more walls and officers at sections of the border with Mexico. But regions with difficult terrain are leading to more migrant deaths.
SHOW TRANSCRIPT

"We do know that deaths are going up," said Mike Kreyche, a member of Tucson Samaritans. "People from Central America, Mexico looking for some relief from the terrible violence and poverty they're suffering."

"The need is there," said Maria Ochua, another member. "The need to support their families and get away from the violence in their countries."

We're at the U.S.-Mexico border, and in this area, along the southwestern border, 240 migrants died crossing from Mexico into the U.S. last year.

There's something strange happening at the U.S.-Mexico border. U.S. Border Patrol is seeing (and apprehending) fewer people crossing illegally into the country. But at the same time, the number of migrants dying at the border has remained steady — higher now than it was in the late 1990s.

"This looks like the real water drop," Kreyche said. "There's a good chance it was used by people walking through here."

Tucson Samaritans is one of several groups that drops water, food and other aid on the trails migrants take into the U.S.

"The fences tend to end when the going gets tough," Kreyche said. "People are forced to do more dangerous and desperate things, take different roads."

This is one of the spots where aid groups drop water and supplies for migrants coming across the border. We're up here in the mountains. You can't build a wall here, and this is an area where the Border Patrol might not find a lot of migrants who are crossing through into the US.

"The amount of deaths has not really diminished," Ochua said. "I mean, it goes up and down a few numbers."

Why has it held steady like that while fewer people have come?

"Because of the more dangerous areas where they're crossing through," Ochua said. "The areas are, as you can see through here, it's very rocky, very slippery in some areas. People are walking through that have no idea of the terrain they’re going to be hiking through."

Hiking even a few hundred feet of these trails is not easy. And then you consider the fact that the migrants who cross here have another 40 miles or so to go before they get to a safe place.

As for the Tuscon Samaritans and their relationship with Homeland Security, Kreyche said, "Generally, we have a cordial relationship with the individual agents. We're at cross purposes with their mission, but we're just providing basic humanitarian aid. We're going to keep doing what we do."

"One of our friends from Samaritans has been putting out these crosses all over the desert commemorating the places where people have died,” Kreyche said. "The other day he told me he’s got almost 400 out now. They're all over the place."