Palestinians Can Likely Keep Their Office In Washington, DC – For Now 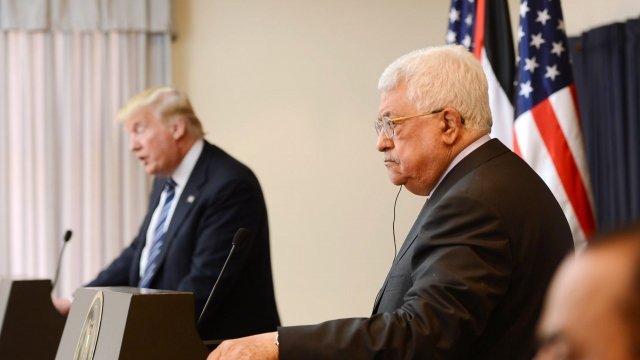 SMS
Palestinians Can Likely Keep Their Office In Washington, DC – For Now
By Jake Jones
By Jake Jones
November 25, 2017
Palestinian leadership cut communication with the U.S. after the news its D.C. office may be forced to close.
SHOW TRANSCRIPT

The U.S. Department of State will likely allow the Palestine Liberation Organization to maintain an office in Washington, D.C. This comes about a week after the department warned Palestinian leaders that office may be forced to close.

Secretary of State Rex Tillerson originally said Palestinian Authority President Mahmoud Abbas violated U.S. law when he called on the International Criminal Court to look into Israeli actions in the disputed West Bank. That decision would force the closure of the Palestinian office unless President Donald Trump determined there were "direct and meaningful negotiations with Israel" taking place.

But that didn't go over well with Abbas; he reportedly ordered a pause in all talks with the U.S., and communication would remain severed if the D.C. office were forced to close.

Now the State Department says the office can stay open for a 90-day period – with limitations. Palestinian leaders in D.C. were advised to keep their work "related to achieving a lasting, comprehensive peace" with Israel.

A State Department spokesperson said it was "optimistic" President Trump would be able to "allow the PLO office to resume full operations" after that 90 days.