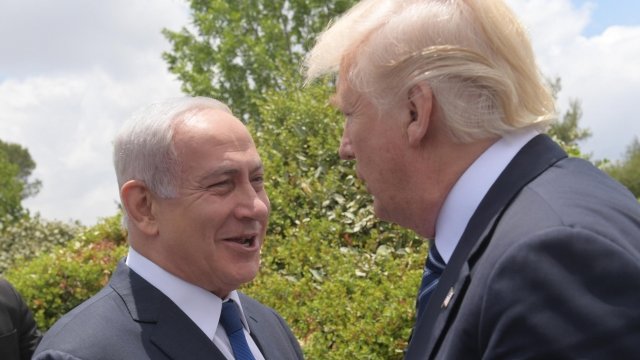 Trump said he may cut Palestinians' aid if they won't negotiate shortly after Israel's Knesset made it harder to give away Jerusalem in a peace deal.

A two-state solution to the Israeli-Palestinian conflict could be even further away this year following some recent moves by the U.S. and Israel.

On Tuesday, President Donald Trump threatened to end monetary aid to Palestinians if they are "no longer willing to talk peace." He tweeted, "We pay the Palestinians HUNDRED OF MILLIONS OF DOLLARS a year and get no appreciation or respect."

Trump's administration championed a peace deal in his early days in office. But Palestinian leadership asked the United Nations to take over peace talks after Trump recognized Jerusalem as Israel's capital, saying the U.S. was too biased.

Also on Tuesday, Israel's Knesset amended its Basic Law — the closest thing Israel has to a constitution — to make it even harder for the country to give up its claim to any part of Jerusalem in a future peace deal.

And the governing party's central committee recently voted for the "application of Israeli law and sovereignty" in the West Bank. The vote carries no legal weight but would effectively legitimize Israeli settlements deemed illegal under international law and further push away the prospect of a Palestinian nation in the West Bank.

Trump's action, which was predicated on a 1995 law, threw the U.S. behind Israel's long-held claim that Jerusalem is its capital, despite the Palestinian claim on the eastern part of the city. The move could further bolster Prime Minister Benjamin Netanyahu's administration, which has been expanding West Bank settlements despite international condemnation.

Palestinian Authority President Mahmoud Abbas called Israel's new Jerusalem law a "declaration of war." Through a spokesman, he said Israel's vote is an "end of the so-called political process."