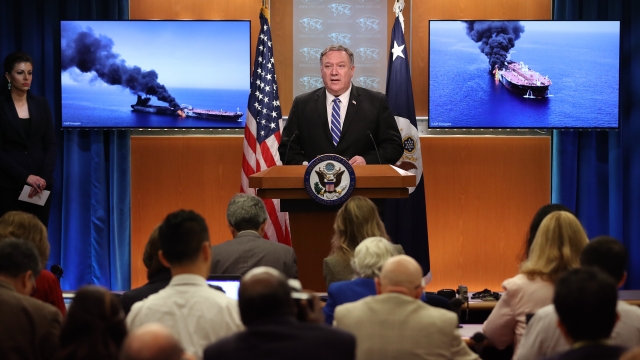 SMS
US, Iran Release Conflicting Videos Of Oil Tanker Attacks
By LeeAnne Lowry
By LeeAnne Lowry
June 14, 2019
The U.S. and Iran released video and images to back up their conflicting claims about Thursday's oil tanker attacks.
SHOW TRANSCRIPT

The U.S. and Iran each released videos to back their conflicting accounts of an attack on oil tankers in the Gulf of Oman.

The U.S. says it responded to two separate distress calls Thursday morning from two oil tankers — one Norwegian-owned and the other Japanese-owned.

The U.S. released video and images it claims show Iran removing an unexploded mine from the Japanese-owned tanker.

But the ship's operator refuted that mines were involved in the explosion. He said based on the crew's account of what happened, a "flying object" struck the tanker.

Iran's Tasnim News Agency published photos and video Friday purportedly showing the Iranian Navy rescuing the tankers. It also released video of the U.S. ship nearby, seemingly not involved in the operation.

The conflicting accounts mark increasing tension between the countries. The U.S. said late Thursday it "has no interest in engaging in a new conflict in the Middle East" but will "defend [its] interests."