When The US Decided The Future Of Latin America 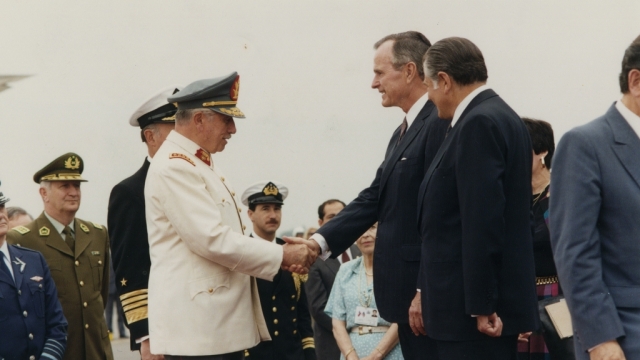 The U.S. has a long — and controversial — history with countries stretching from Mexico to the tip of South America. Presidents and spy agencies weren't exactly shy about intervening.

The consequences — some intended, some not — can arguably be linked to many of today's issues in Latin America, including migration.

First, some history. Let's start in 1823 with the Monroe Doctrine, which asserted U.S. protection of the Western Hemisphere. It included these two provisions:

The Western Hemisphere was closed to any more colonization.

An effort by a European power to control a nation here would constitute a hostile act against the U.S.

Next stop, 1904 and the Roosevelt Corollary to the Monroe Doctrine. It in essence established the U.S. had a right to intervene in Western Hemisphere countries' internal affairs.

Then there was the drive of "manifest destiny," leading to the Mexican-American War from 1846 to 1848. The U.S. ended up with what is now Arizona, Nevada, California, Utah, New Mexico. And Mexico recognized Texas as part of the U.S.

U.S. intervention in the Mexican Revolution (to protect American interests) is also worth noting. That was 1910-1920. Let's skip to modern times. For decades, intervention was still active, just more hush-hush.

In 1973, the CIA supported the overthrow in Chile of socialist Salvador Allende by Augusto Pinochet, who was head of the Chilean military. Thousands were tortured and killed during the Pinochet dictatorship. Many who became known as "the disappeared" were never heard from again.

Some historians and policy experts maintain the United States is at least partly responsible for the conditions on the Northern Triangle.

They point to the 1954 CIA-directed military coup in Guatemala. America worried that changes in labor practices would hurt U.S. economic interests, but officially cited the threat of a "Communist octopus" in the area. Years of war followed, with estimates of hundreds of thousands being killed.

Today, citizens still feel the effects of civil wars that ravaged El Salvador and Guatemala in the 1980s. The wars, including various U.S. efforts to squash socialist movements, have been linked to years of turbulence and the creation of gangs and lawlessness, prompting thousands of families to flee.

Honduras did not have a civil war but was affected by the neighboring battles, in part because the U.S. used Honduras as a staging area to train troops who were involved.

The bottom line is this: What appeared to be in the United States' best interests at the time might have fostered ill will in some cases and contributed to life-altering instability in others.