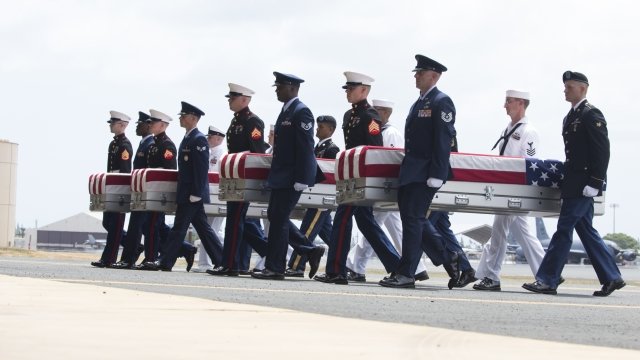 By Katherine Biek
September 11, 2018
Officials won't publicly release the two names until their families have been notified, but they did say the service members both died in late 1950.
SHOW TRANSCRIPT

U.S. scientists say they've identified the first two sets of remains of U.S. service members that were turned over by North Korea in late July.

Officials won't publicly release the two names until their families have been notified, but they did say the two service members both died in late 1950.

President Donald Trump and North Korean leader Kim Jong-un agreed back in June to recover the remains of prisoners of war and those missing in action from the Korean War.

North Korea handed over 55 boxes of remains and one dog tag on July 27. But scientists can't yet say for sure if some boxes contain more than one set of remains.

But the other sets of remains might not be as easy to identify since they aren't as complete as the first two were. It could take years to complete the identification process.

The Department of Defense estimates about 7,700 U.S. military personnel are still unaccounted for from the Korean War. Of those, the remains of an estimated 5,300 Americans are still believed to be in North Korea.