Attention All Shoppers: Grocery Prices Are Continuing To Plummet 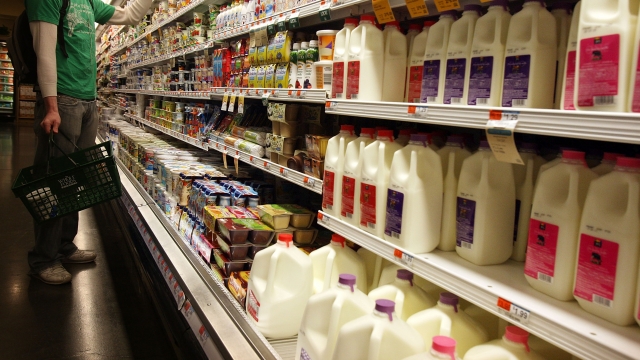 Attention all shoppers: Grocery prices in the U.S. have been plummeting for almost a year now.

Which is great news for the average consumer, but not so great for the people actually producing and distributing the food.

According to the U.S. Department of Labor, grocery store staples are significantly cheaper now than they were in 2015.

The average price of a dozen eggs dropped a little more than a dollar.

A gallon of milk is about 40 cents cheaper.

And a pound of ground beef is down about 50 cents.

Here's why: The U.S.' food supply has continued to grow, but demand for those products overseas has declined.

This is especially true in countries like China, where the American dollar is continuing to get stronger, making goods from the U.S. even more expensive.

SEE MORE: The US Government Just Bought $20 Million Worth Of Surplus Cheese

As a result, American shoppers are enjoying what could be the longest streak of falling food prices in 50 years.

And they're not complaining.

"Definitely less painful to go to the store. I would say I can save anywhere from about $25 to $50 sometimes on my grocery bills in comparison to last year," one woman told CBS.

But while consumers happily stock up at the store, supermarkets and farmers are getting hit where it really hurts — their wallets.

Grocery stores are facing in increase in food deflation, which has sparked what analysts are calling a "price war" among them.

And farmers are getting less for their milk, cheese and cattle.

Experts say food prices could continue to drop until the end of 2016.

But not every product is getting cheaper — some fruits and vegetables have actually gotten pricier this year thanks to a drought in California.