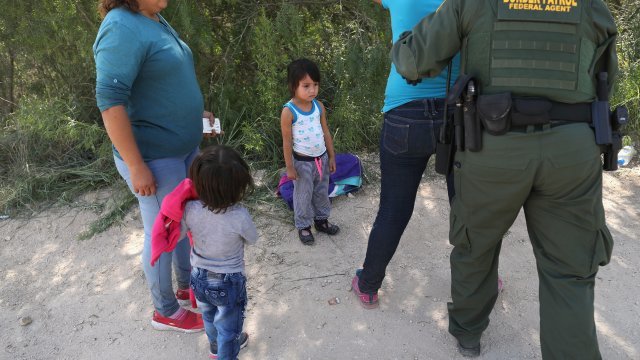 SMS
US Government Performs DNA Testing On Migrants
By Gabrielle Ware
By Gabrielle Ware
July 5, 2018
The government says it will help speed up family reunifications, but critics have serious concerns about privacy.
SHOW TRANSCRIPT

Ahead of a looming deadline to reunite immigrant children with their parents, the federal government is performing DNA tests on migrant families. But critics are calling the action a privacy violation.

Nearly 3,000 migrant children who were separated from their families under the U.S.' zero-tolerance immigration policy are still in government custody, according to Health and Human Services Secretary Alex Azar. He said Thursday that none of those children have been reunited with their families since a court set a deadline to reunite at least some families by next Tuesday.

At least one woman, however, was reunited with her 8-year-old child Thursday.

To expedite the process, officials are using DNA tests. They're meant to keep adult migrants from claiming children who aren't theirs. One official said, "It is not uncommon for children to be trafficked or smuggled by those claiming to be parents." It's not clear if the process requires consent or if the DNA will be stored in a database.

RAICES, a nonprofit legal aid group for immigrants, says the process allows the government to surveil the children "for the rest of their lives." It also claimed the need to conduct DNA tests demonstrates incompetence on the administration's part, saying "they never registered parents and children properly."