US Gives Venezuelan Opposition Leader Control Over Some Assets 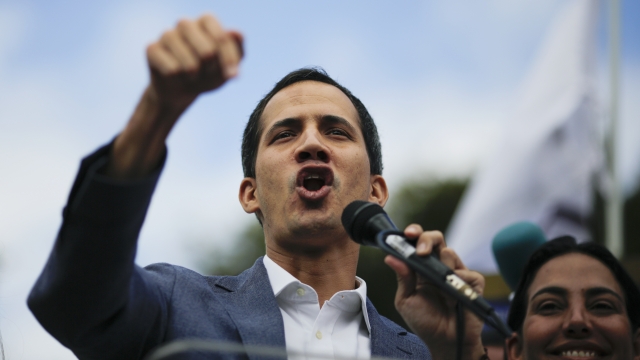 SMS
US Gives Venezuelan Opposition Leader Control Over Some Assets
By Ahmed Jawadi
By Ahmed Jawadi
January 29, 2019
The State Department said this​ will "help Venezuela’s legitimate government safeguard those assets for the benefit of the ​​Venezuelan people."
SHOW TRANSCRIPT

The State Department said Tuesday it has given control of certain assets held by the Federal Reserve Bank of New York and other U.S.-insured banks in Venezuela to U.S.-backed opposition leader Juan Guaido.

According to a statement, the move is in an effort to "help Venezuela's legitimate government safeguard those assets for the benefit of the Venezuelan people." Guaido was given the authority last Friday.

On Tuesday, Venezuela's chief prosecutor asked the country's Supreme Court to ban Guaido from leaving the country and freeze his bank accounts. Guaido dismissed the move, saying: "The world is clear on what's happening in Venezuela. . . . Let's not desist because of threats and persecution. We will continue to advance in our fight."

U.S. national security adviser John Bolton also responded to the chief prosecutor's request, tweeting the U.S. "denounce(s) the illegitimate former Venezuelan Attorney General's threats." Bolton reiterated that "there will be serious consequences for those who attempt to subvert democracy and harm Guaido."

The Trump administration announced sanctions against Venezuelan President Nicolás Maduro and Venezuela's oil industry on Monday. Bolton said that move will hold back about $7 billion in assets and result in more than $11 billion in lost assets over the next year.