Global Trade Is Propping Up Strong US GDP Growth 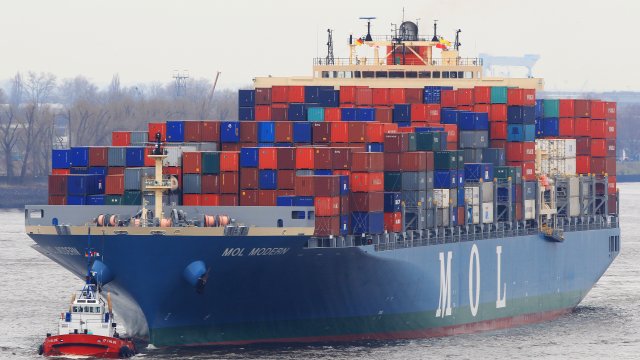 SMS
Global Trade Is Propping Up Strong US GDP Growth
By Matt Picht
By Matt Picht
April 26, 2019
The recent strong numbers for U.S. GDP growth were driven in part by volatile factors like international trade and inventories.
SHOW TRANSCRIPT

On the surface, the U.S. economy is starting 2019 off with a bang: GDP grew 3.2 percent in the quarter, well ahead of expectations. But two of the major factors bolstering that growth — international trade and increased product inventories — might not last for much longer.

The U.S. trade deficit shrank by 3.4 percent to $49.4 billion in February, as the country brought in more money from exports and cut spending on imports. Businesses also stocked up on inventory in the first quarter, which bumped GDP growth up as well.

But don't expect those positive numbers to last forever: those stats are prone to fluctuate wildly as conditions change. International trade numbers in particular might get worse later on in the year: the International Monetary Fund predicts this year will see the lowest growth rate for GDP since 2009.

President Trump might be able to help prop up the economic surge by inking some trade deals in the near future. The president is planning to host the leaders of Japan and China for separate economic talks.

U.S. exports have struggled to compete in Japan since the president withdrew from the Trans-Pacific Partnership trade agreement; and the ongoing trade war between the U.S. and China has squeezed both countries. Easing those factors could help keep the U.S. international trade numbers strong.