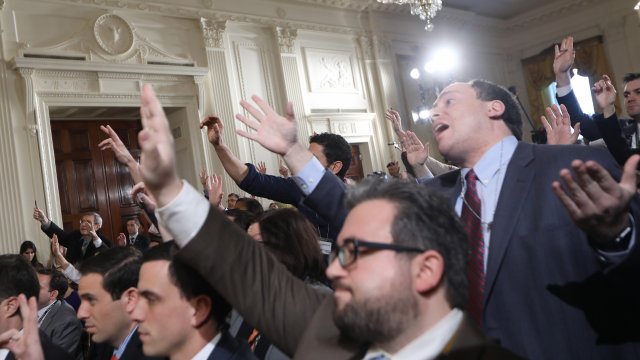 The treatment of journalists in the U.S. dropped into the "problematic" zone, according to this year's World Press Freedom Index.

Reporters Without Borders cites "the effects of President Donald Trump's second year in office" — including what it calls his "notorious anti-press rhetoric" — for the three-point drop. But the president isn't the only reason the U.S. slid into the "problematic" zone. The organization says journalists in the U.S. are facing an "increasingly hostile climate," including death threats and attacks, like last year's deadly shooting at the Capital Gazette in Annapolis, Maryland, that killed five staff members.

President and COO of the nonpartisan Freedom Forum Institute Gene Policinski says it's important to know most journalists aren't "engaged in some ideological fight with the White House."

"Part of this whole debate over 'fake news' and bias reporting, that takes place around this tiny sliver, some small percentage of American journalists at the White House press corps," he said. "Reporters in most communities in America, and even bigger cities, are there to go to those boring meetings that we don't have time or any interest to go to, but on our behalf."

Policinski says it's not too late for the U.S. to move up in the the ranking, but that will take change from newsrooms and news consumers.

"I think this ranking for the Unites States is sort of equal parts reality and warning," he said. "As a consumer, get active, get engaged, know what the facts are, look at multiple news sources."

Reporters Without Borders ranks Norway, Finland and Sweden as the three countries with the most press freedom. Last on the list: Turkmenistan, with North Korea right behind it.