US Envoy For North Korea Is Heading To Russia 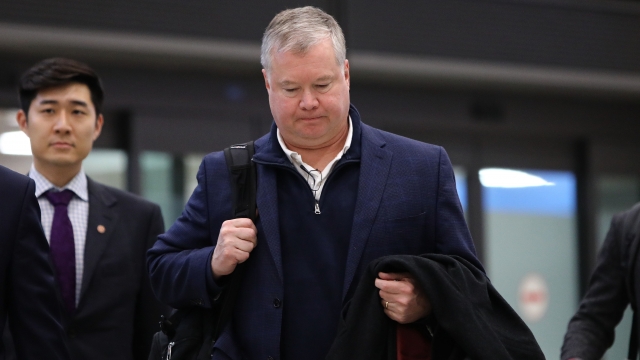 The U.S. envoy for North Korea traveled to Moscow on Wednesday ahead of a historic meeting between Russian President Vladamir Putin and North Korean leader Kim Jong-un.

The Kremlin announced this week that Putin and Kim are preparing to meet for what's most likely the first time. The U.S. State Department said the envoy is meeting with Russian officials to discuss the denuclearization of North Korea.

President Trump has met with Kim twice to discuss denuclearization. After a tense second summit ended with no progress, Kim said he'll give the U.S. until the end of the year to decide if there will be a third summit.

While the date of the Russia-North Korea summit has not been announced, South Korean outlets report it might take place as Putin heads to China next week.

But CNN speculates the meeting could be sooner. It points out that North Korea's state-owned airline usually only flies from Pyongyang to a port city in Russia on Mondays and Fridays, but this week it's flying there on Thursday. An expert told CNN it's too early to say for sure if that's related to a summit. But the expert also said the model of plane scheduled for Thursday's trip is almost never flown on that route, so it could be for government use.