Deadly Gaza Protests Continue As US Embassy Opens In Jerusalem 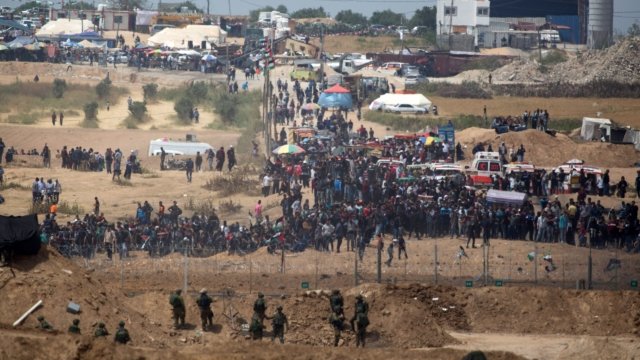 SMS
Deadly Gaza Protests Continue As US Embassy Opens In Jerusalem
By Katherine Biek
By Katherine Biek
May 14, 2018
Thousands of Palestinians demonstrated in the West Bank and Gaza as the U.S. Embassy was relocated to Jerusalem.
SHOW TRANSCRIPT

Leading up to Monday's relocation of the U.S. Embassy in Israel, thousands of Palestinians in the West Bank and Jerusalem were encouraged to protest. As of early afternoon local time, Israeli security forces were already clashing with protesters.

At the same time, Palestinians in Gaza were also still protesting along the border with Israel. Government officials say at least 41 Palestinians were killed by Israeli soldiers on Monday, and at least 1,700 others were wounded.

Israel Defense Forces has responded forcefully to the protests, which it's described as "violent riots." The IDF says Palestinians have thrown explosive devices at Israeli soldiers, set fire to buildings and damaged the border fence.

Prior to Monday's demonstrations, nearly 50 Palestinians had died and more than 9,500 had been injured in the border protests, according to the Palestinian Ministry of Health in Gaza. No Israelis have been reported killed or injured.

The border protests are scheduled to end Tuesday. That's the day Palestinians refer to as "nakba," or the day of catastrophe, when Palestinians left modern-day Israel following the Jewish state's founding in 1948. While Israel says the Palestinians fled, many Palestinians instead view this as an expulsion.