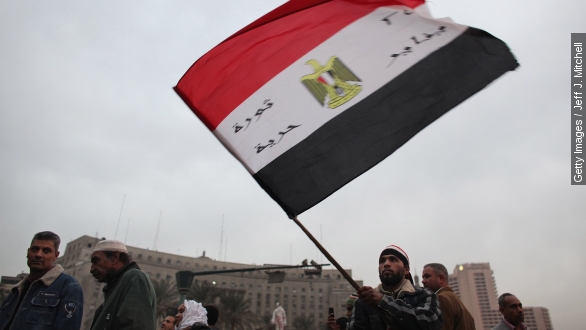 SMS
US-Egypt Ties Scrutinized After American's Life Sentence
By Jill Ornitz
By Jill Ornitz
April 11, 2015
Less than two weeks after the U.S. lifted its ban on military aid to Egypt, an Egyptian court has sentenced an American to life in prison.
SHOW TRANSCRIPT

Mohamed Soltan, an Egyptian-American arrested for protesting Egypt's current leaders, has been sentenced to life in prison.

Egyptian authorities allege Soltan has ties to the outlawed Muslim Brotherhood because of his father's position within the group. Thirteen members of the group were sentenced to death Saturday, including the brotherhood's chief leader, Mohammed Badie. (Video via Daily News Egypt)

After his arrest for protesting the overthrow of former Egyptian president Mohamed Morsi in 2013, Soltan began a hunger strike in early 2014 to protest his detention. As of January 2015, he's still refusing food. And a video obtained by Middle East Eye shows his life in prison has been bleak. (Video via YouTube / MSA OSU)

"I'm either in solitary confinement in a dungeon somewhere ... Or, I'm in a hospital bed because the hunger strike I started January 26 earlier this month has gotten the better of me. Or, I'm dead," Soltan said.

Soltan and his family have been critical of the perceived inaction from Washington. A letter from Soltan smuggled out of prison and obtained by The New York Times reads, "I often get asked sarcastically by judges, officers, and even inmates, 'Where is this first world country that takes such pride in defending human rights and freedoms? Where are they now to help you?' Of course, I am left speechless every time."

And a recent move from the White House may not inspire much confidence from Soltan.

But critics of the lift say the delivery of military aircraft and supplies indirectly validates the regime's long list of human rights abuses.

According to the State Department, Egypt will remain the world's second largest recipient of U.S. military aid, behind Israel.