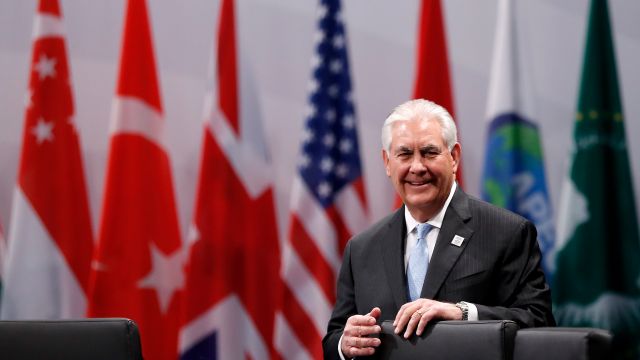 The White House wants to slice 28 percent from the State Department budget.

Three areas are going to get hit especially hard with that cut: the United Nations, foreign aid and funding to fight climate change.

Money for U.N. peacekeeping is being reduced, the Global Climate Change Initiative is being axed and humanitarian and educational assistance are being reprioritized and reduced.

Israel will still get billions in security assistance, and the budget sets aside $2 billion for embassy construction and maintenance.

Operations in conflict zones like Syria, Iraq and Afghanistan are also seeing deep cuts. In all, the State Department's budget is going from around $53 billion to about $38 billion.

The administration says this is a "hard power" budget, not a "soft power" budget focused on diplomacy. That's not likely to win any favor with Congress. Even President Donald Trump's defense secretary has defended the value of soft power.

"If you don't fund the State Department fully, then I need to buy more ammunition," James Mattis told Congress during a Congressional hearing in 2013.

Republicans and Democrats have said deep cuts to the department mean the budget won't survive the Senate floor.

"It's dead on arrival — it's not going to happen. It would be a disaster. If you take soft power off the table, then you're never going to win the war," Sen. Lindsay Graham said in February. "What's most disturbing about the cut in the State Department's budget — it shows a lack of understanding what it takes to win the war."