US May Lift Endangered Species Protections For Gray Wolves 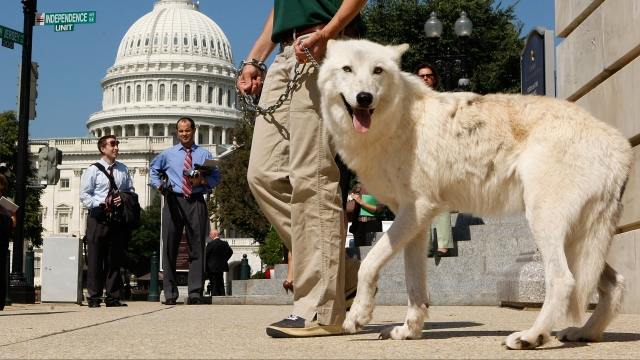 U.S. wildlife officials said gray wolves are no longer endangered, and they're reportedly considering lifting protections in the Lower 48 states.

Acting Interior Secretary David Bernhardt announced the proposal Wednesday at a wildlife conference in Denver. He said the population of gray wolves in the U.S. has fully recovered.

A U.S. Fish and Wildlife spokesman told The Associated Press a formal announcement will be made in the coming days.

Wildlife advocates criticized the proposal and will most likely challenge a decision to lift protections in court. On Twitter, the National Wildlife Federation said delisting the wolves now would be "premature." The president and CEO of the federation also said not all populations of gray wolves have recovered and that the nonprofit will continue to "work with the Fish and Wildlife Service to recover gray wolf populations and delist distinct populations that have recovered."

Meanwhile, farmers and ranchers are praising the proposal. The American Farm Bureau Federation said wolf populations have recovered and that state wildlife agencies should be in charge of managing the species.

Gray wolves received endangered species protections in 1975, when there were about 1,000 left in the U.S. There are now about 5,000. The federal government suggested lifting protections in 2013, but federal courts struck it down.