US Commits To Ousting Maduro In Venezuela 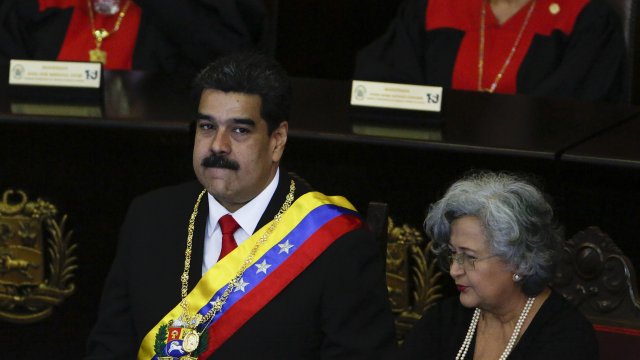 SMS
US Commits To Ousting Maduro In Venezuela
By Matt Picht
By Matt Picht
January 28, 2019
New sanctions on Venezuela's oil company are the most direct pressure the U.S. has put on the country's president, Nicolás Maduro, to resign.
SHOW TRANSCRIPT

The U.S. has thrown its weight behind a legitimacy challenge to Venezuelan President Nicolás Maduro. But how far will it go to force Maduro out of power?

The U.S. has sanctioned Venezuela's state-run oil company in an effort to redirect the country's most valuable assets to Juan Guaidó — the opposition leader challenging Maduro's claim to the presidency.

But Maduro hasn't budged so far: he's ignored all of the international calls to cede power to Guaidó. And the longer Maduro stays in power, the more tempting it is for the U.S. to remove him by force.

President Trump and his advisers haven't ruled out direct intervention in the country. And the appointment of Elliott Abrams to head up the State Department's response might prompt things down that path — Abrams was a part of the Reagan-era Iran-Contra plot to overthrow Nicaragua's left-wing government.

Trump has had an aversion to prolonged military engagements overseas. But U.S. intervention wouldn't necessarily have to be a protracted occupation to tilt the balance of power.

Alejandro Velasco, an associate professor at NYU, told Newsy: "It would be a tactical move that then immediately opens up a kind of a cascading effect among ranks of the military who will basically decide, are we going to fight against the United States? Or are we going to accept the amnesty that the national assembly has put on the table?"

Venezuela's military might be the deciding factor in the struggle between Maduro and Guaidó. So far most military officers have stuck stuck with Maduro, but U.S. intervention could change that calculus.

But greater U.S. involvement in the crisis could backfire as well: international support for Guaidó's claim to power could evaporate if the U.S. is seen as trying to force regime change on Venezuela.

Velasco said: "It recovers just the worst vestiges of a US foreign policy directed towards Latin America that is least of all concerned with things like democracy and human rights promotion. How will that be read among these international partners who, again, even though they've been kind of on board so far might see this as no go territory in terms of their support."

Maduro hasn't moved to completely squash the opposition just yet, but the crisis is taking a toll. PROVEA, a human rights organization in the country, estimates 35 people have been killed and hundreds more detained during the protests.