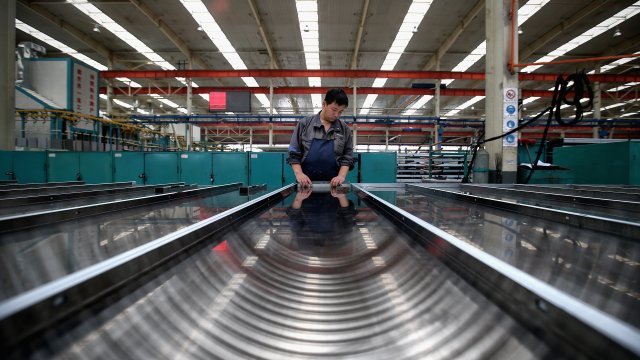 SMS
US Targets China's Manufacturing In First Shots Of Possible Trade War
By Matt Picht
By Matt Picht
June 15, 2018
Both the U.S. and China are taking aim at potential weak spots in what could be the first round of a major trade war.
SHOW TRANSCRIPT

President Trump's first round of long-threatened tariffs against China are now a reality, pushing two of the world's biggest economies closer to an all-out trade war.

The U.S. announced a 25 percent tariff on $50 billion worth of Chinese imports; the first round of those tariffs take effect July 6. In response, China promises to retaliate with tariffs "on the same scale and the same strength."

These tariffs will affect only a fraction of the overall trade between the two countries. The U.S. and China traded $635 billion worth of goods in 2017. But both countries are targeting political weak spots with their first round of tariffs.

The U.S. tariffs will come in two separate waves. The first is a scaled-down version of the product list the White House announced in April. These tariffs cover imports of a wide range of industrial parts and machinery, are worth about $34 billion, and go into effect July 6.

The administration is also planning to tax a new list of $16 billion worth of Chinese imports covering some manufacturing materials, among other things. These tariffs still need to go through a public review process before they become official. 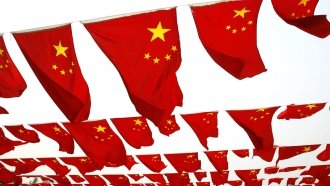 Both American lists are targeting industries crucial to China's "Made in China 2025" initiative. The program is China's bid to reorient its economy toward advanced manufacturing, but the U.S. says China is using unfair tactics to achieve that.

China previously signaled it would retaliate by taxing major agricultural imports like soybeans. Those tariffs could put a lot of economic strain on rural farming districts — many of which helped propel President Trump to victory in the 2016 election.

This might just be the tip of the iceberg. According to The New York Times, the White House is readying restrictions on Chinese investment in the U.S., which could go into effect by the end of the month.