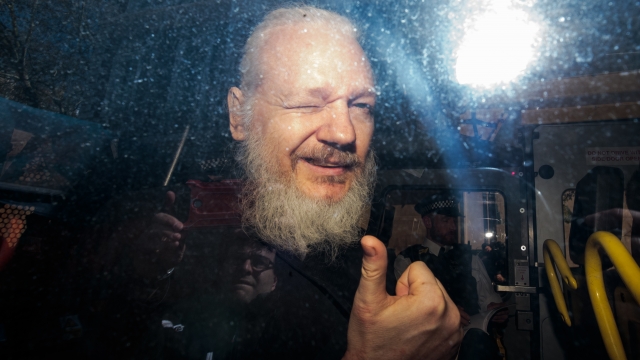 SMS
US Charges WikiLeaks Founder Julian Assange With Conspiracy
By LeeAnne Lowry
By LeeAnne Lowry
April 11, 2019
Assange was arrested at the Ecuadorian Embassy in London after Ecuador revoked his asylum.
SHOW TRANSCRIPT

The U.S. charged WikiLeaks founder Julian Assange with conspiracy to commit computer hacking, according to the Justice Department.

The charge stems from when WikiLeaks published thousands of classified documents provided by former U.S. intelligence officer Chelsea Manning back in 2010. If convicted, Assange faces a maximum penalty of five years in prison.

Assange was arrested Thursday at the Ecuadorian Embassy in London after Ecuador revoked his asylum.

Ecuadorian President Lenín Moreno said in a video the country "has reached its limit on the behavior of Mr. Assange" and listed specific incidents leading up to the decision.

Assange had been granted asylum by Ecuador and was living in its embassy since 2012. He was avoiding extradition to Sweden for sexual assault allegations, which were eventually dropped. But Sweden said Thursday it may reopen the probe.

Now, with the asylum withdrawn, London police detained him on both a U.S. extradition warrant and a U.K. warrant for failing to surrender to the court in 2012. He appeared before a judge soon after the arrest and was found guilty of breaking bail conditions in the U.K. case. He could face up to a year in jail. He's set to be sentenced May 2.