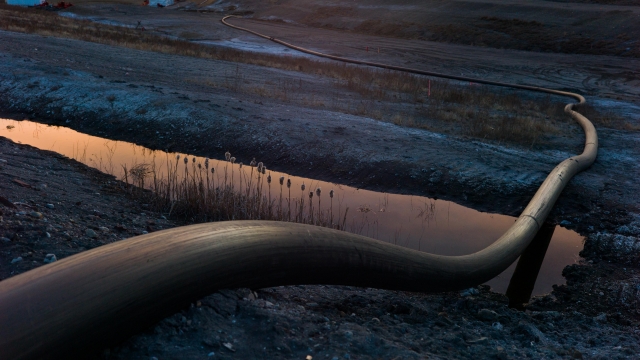 SMS
Tribes Across North America Sign Treaty To Fight Tar Sands Expansion
By Ethan Weston
By Ethan Weston
September 23, 2016
Tribes from both the U.S. and Canada are joining together to fight against proposed pipelines from the Alberta tar sands.
SHOW TRANSCRIPT

Native American tribes in the U.S. and Canadian First Nations have set their sights on stopping more than just the Dakota Access Pipeline.

At least 50 tribes and First Nations from across the U.S. and Canada signed on to a treaty Thursday that unites them against other proposed pipelines from the Alberta tar sands in Canada.

"Mother Earth can't take any more of this pollution and destructiveness," Chief Judy Wilson of the Neskonlith Indian Band said.

The tar sands are a large deposit of bitumen — a substance that isn't exactly crude oil but can be made into oil. After it's extracted and converted, it's sent to oil refineries through pipelines hundreds of miles long.

Some of the tribes that signed the treaty are already fighting pipelines, like the Lummi Nation of Washington and the Standing Rock Sioux Tribe in North Dakota.

The groups also plan to oppose rail and tanker projects in the U.S. and Canada.

But the native groups say the tar sands projects "threaten many Indigenous Nations' territories … with the very real risk of toxic and hazardous oil spills."