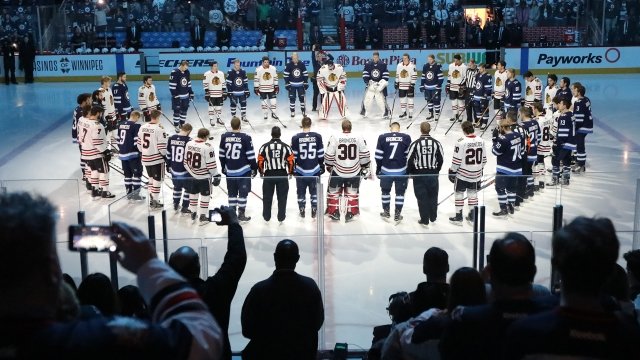 SMS
North America Mourns After Hockey Team's Bus Crashes In Canada
By Katie Cammarata
By Katie Cammarata
April 8, 2018
The hockey world is mourning after a bus crash carrying a junior hockey team in Canada killed 15 and injured more than a dozen others.
SHOW TRANSCRIPT

North America is mourning after a bus collided with a tractor-trailer in Canada, killing 15 people and injuring more than a dozen others.

The Humboldt Broncos hockey team was on its way to play in the Saskatchewan Junior Hockey League playoffs when the team's bus crashed late Friday afternoon.

Canada's Prime Minister Justin Trudeau issued a statement to those affected by the incident Saturday, saying: "We are here for you. As neighbours, as friends, and as Canadians, we grieve alongside you."

And multiple National Hockey League teams offered thoughts and prayers, as well as donations, to those affected by the tragedy.

At Saturday night's game, the Chicago Blackhawks and Winnipeg Jets wore the word "Broncos" on the back of their jerseys to honor the victims of the crash.

A GoFundMe page set up Friday to help victims' families with expenses had raised more than $3.4 million as of Sunday morning.