The US Birth Rate Is Dropping, But Other Countries Have It Much Worse 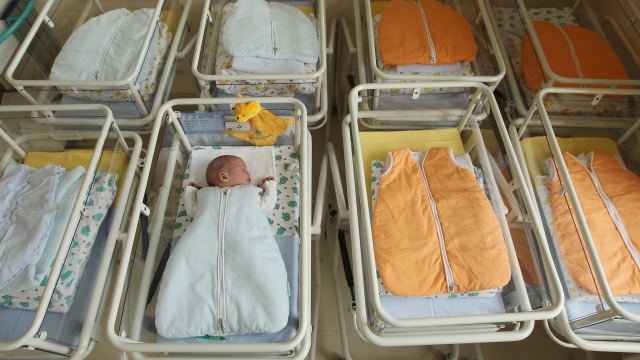 The fertility rate in the U.S. is on the decline, but many other countries have much lower numbers.

According to data released by the Centers for Disease Control and Prevention, the U.S. rate dropped to 62.3 births per 1,000 women, the lowest level since the government started keeping track in 1909.

We don't know exactly why fertility rates are falling in America, but experts have some ideas. Many women have started getting pregnant later in life, and the birth rate among teenagers has fallen.

The U.S. Census Bureau says the falling fertility rate probably won't shrink the population in the long term. It is still predicting the U.S. will reach 400 million people by 2051.

But it's a different story in other parts of the world.

Singapore's rate sits at 8.4 births per 1,000 people. A few years ago, the government started offering people financial incentives to get pregnant, and Mentos mints released a promotional video to hopefully kick-start the country's baby-making.

In the mid-2000s, Russia took it one step further with "Conception Day," where citizens got the day off of work so they could ... you know. Bonus: If you had a baby nine months later, you could get a prize. Sexy.

But in Russia's case, it must be working. A few years after that program began, the nation's birth rate started going up.