The US Attorney General Didn't Like That Clinton Emails Announcement 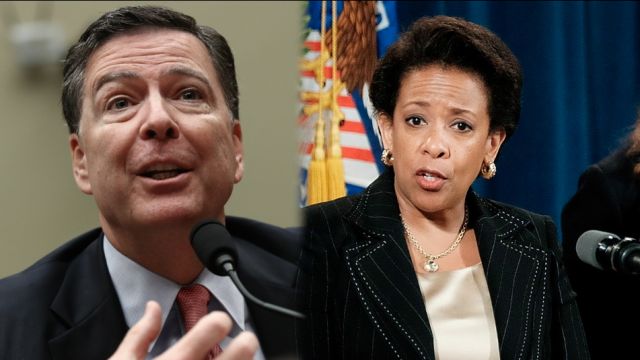 SMS
The US Attorney General Didn't Like That Clinton Emails Announcement
By Lindsey Pulse
By Lindsey Pulse
October 29, 2016
The FBI director's decision to notify Congress apparently goes against long-held protocol for the Justice Department.
SHOW TRANSCRIPT

FBI Director James Comey doesn't appear to have many people on his side right now.

On Friday, the director wrote a letter to Congress saying the agency is looking at new developments involving Hillary Clinton's private email server.

But officials say that move went against the wishes of several top-ranking Justice Department officials — including Attorney General Loretta Lynch.

Lynch reportedly told Comey not to notify Congress this close to the election, but he apparently didn't agree.

The issue involves emails recovered by the FBI while investigating former U.S. Rep. Anthony Weiner and the alleged sexual texts he sent to an underage girl. Comey himself said it was unclear what was in the emails or if they were significant to the bureau's prior investigation into Clinton's use of a private email server.

The director said his motivation to rehash the debacle came down to two things: He felt an obligation to lawmakers, and he wanted to be transparent with the public.

Even so, the move apparently isn't in line with Justice Department protocol. One official told The Washington Post, "We don’t take steps that will be viewed as influencing an election."

The official said Comey was fully aware he was acting independently of Justice Department regulations.

Not surprisingly, Comey's announcement, along with the uncertainty surrounding what's in the new emails, was met with immediate backlash both from the public and the Clinton campaign.

Hillary Clinton said at a press conference: "We are 11 days out from perhaps the most important national election of our lifetimes. Voting is already underway in our country, so the American people deserve to get the full and complete facts immediately."