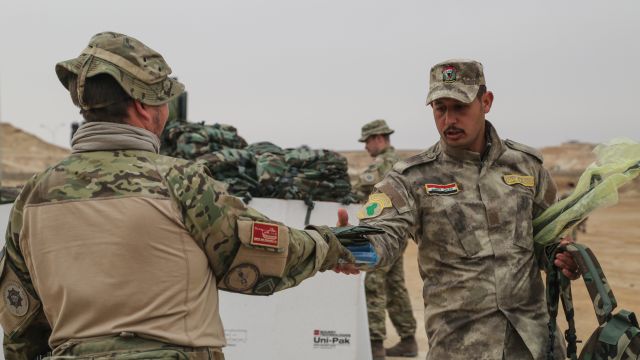 SMS
US Army Lost Track Of $1 Billion Worth Of Weapons And Equipment
By Katherine Biek
By Katherine Biek
May 24, 2017
The unaccounted-for military supplies were supposed to be given to Iraqi armed forces as part of the Iraq Train and Equip Fund.
SHOW TRANSCRIPT

The U.S. Army lost track of more than $1 billion worth of military equipment and weapons sent to Iraq and Kuwait.

That information comes from a now-declassified Department of Defense audit from 2016 that was obtained by Amnesty International.

The audit itself did not contain specifics about what equipment is unaccounted for, but the rights group reports "tens of thousands of assault rifles" and "hundreds of Humvees" are missing.

The weapons and equipment were meant to be provided to the Iraqi military and Kurdish forces through the Department of Defense's Iraq Train and Equip Fund.

The fund was created in fiscal year 2015, and Congress initially appropriated $1.6 billion for it. Almost another $1 billion is supposed to be added to the fund this year.

But the audit revealed management kept incomplete records of what was being transferred by using multiple spreadsheets and handwritten receipts. So it's unknown if the specific weapons and equipment were actually given to the Iraqi armed forces.

The audit further noted that the U.S. does not track the fund transfers after they're delivered to Iraq because the weapons and equipment are no longer U.S. government property.

Patrick Wilcken, an arms control and human rights researcher for Amnesty International, said: "The need for post-delivery checks is vital. Any fragilities along the transfer chain greatly increase the risks of weapons going astray in a region where armed groups have wrought havoc and caused immense human suffering."

The U.S. military has already started to correct its accountability process, according to the audit.