US And Russian Warships Nearly Collide In Pacific Ocean 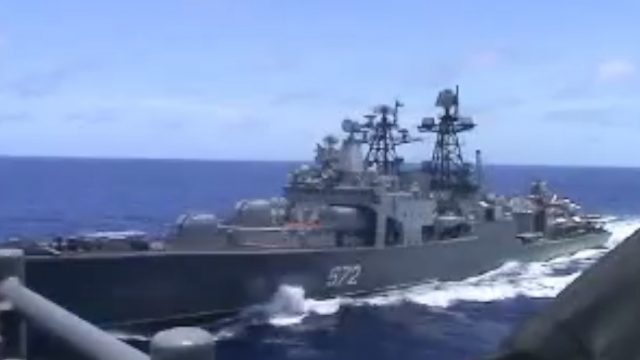 SMS
US And Russian Warships Nearly Collide In Pacific Ocean
By LeeAnne Lowry
By LeeAnne Lowry
June 7, 2019
The U.S. says the Russian ship came up from behind and accelerated, while Russia says the U.S. was maneuvering dangerously.
SHOW TRANSCRIPT

U.S. and Russian warships nearly collided in the Pacific Ocean on Friday morning. The ships reportedly came within 50-165 feet of each other.

CNN says international maritime law stipulates ships must stay at a safe distance, which is usually considered to be around 3,000 feet. It also says a ship can't interfere with another vessel if it's conducting a flight operation.

The U.S. says it was conducting a flight operation — that its ship was sailing steadily and recovering a helicopter when the Russian ship came up from behind and accelerated. Russian state media says the U.S. ship was the one moving dangerously, forcing the destroyer to "maneuver urgently" avoid a crash.

The U.S. Navy tweeted videos of the encounter but then took them down. Later, when the videos were being shared anyway, the Navy put them back up.

This new conflict comes just days after a similar incident where the U.S. accused a Russian aircraft of flying dangerously close to an American one. Russia disputes that accusation as well.