US And Mexico Nearing Deadline To Release Details Of Trade Deal 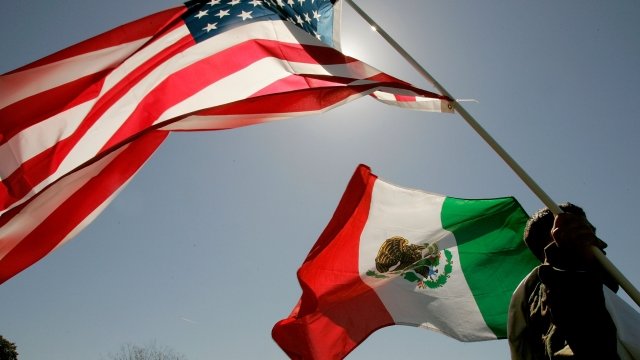 SMS
US And Mexico Nearing Deadline To Release Details Of Trade Deal
By Katherine Biek
By Katherine Biek
September 28, 2018
The Trump administration has until Sunday to release the details of the deal if it wants to make a self-imposed deadline it set with Mexico.
SHOW TRANSCRIPT

The Trump administration will reportedly release the details of the bilateral trade deal it struck with Mexico as early as Friday.

While the deal is currently just between the U.S. and Mexico, sources told Bloomberg that its text is written in a way that would allow for Canada to be added on at a later date.

Canada rejoined trade talks with the U.S. back in late August. But the country's foreign minister said Canada would only sign a trade agreement that was good for Canada and the middle class.

Until then, U.S. and Mexico officials don't have time to wait if they want to get the deal signed by Mexican President Enrique Peña Nieto's last full day in office on Nov. 30.

U.S. trade law says the president can only sign a new deal once its text has undergone 60 days of review. In order to make the Nov. 30 deadline for Nieto, the Trump administration needs to make the pact's details public no later than Sunday.