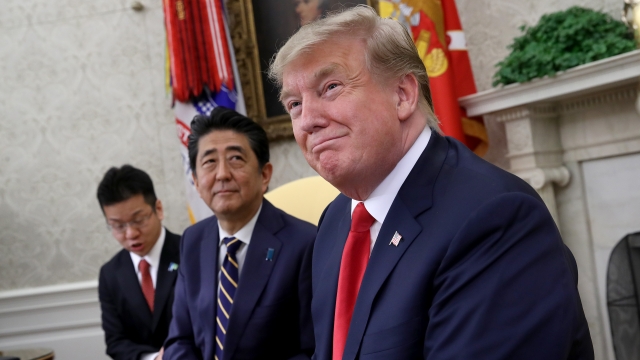 President Trump met with Prime Minister Shinzō Abe about moving forward with a trade deal between the U.S. and Japan.

President Trump and Japanese Prime Minister Shinzō Abe opened talks on a trade agreement between the U.S. and Japan on Friday. The two leaders had announced the negotiations last September.

According to U.S. figures from last year, there's a $67.6 billion trade imbalance in Japan's favor. President Trump is seeking to decrease that difference.

President Trump wants to get rid of agricultural tariffs impacting farmers and ranchers in the U.S., and he's also looking to have more Japanese automobiles built domestically.

"We'll be discussing very strongly agriculture because, as the prime minister knows, Japan puts very massive tariffs on agriculture, our agriculture, for many years going into Japan, and we want to get rid of those tariffs because we don't tariff their cars, so I think something will work out."

Japan wants to avoid the possibility of automobile and auto part import tariffs as high as 25%. It would also like to see the U.S. lift the tariffs imposed on steel and aluminum last year.

Beyond tariffs, Abe and Trump discussed North Korea's nuclear program and the possibility of denuclearizing the Korean Peninsula.

President Trump plans to meet Japan's new emperor, Naruhito, in late May. On Friday, the president indicated Japan and the U.S. could potentially sign off on the trade deal while he is visiting.