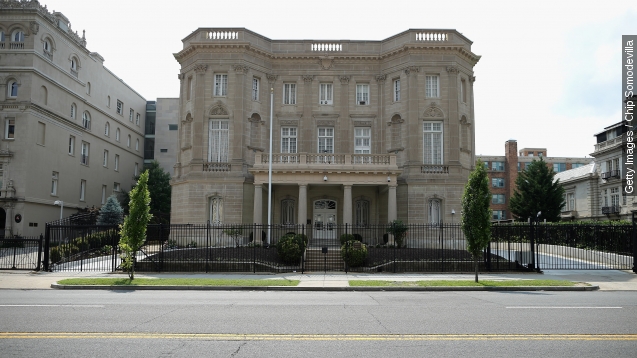 SMS
US And Cuba Reopen Embassies, Restoring Diplomatic Ties
By Matt Moreno
By Matt Moreno
July 20, 2015
The Cuban flag will fly at the U.S. Embassy for the first time since the 1960s, officially re-establishing relations between the two countries.
SHOW TRANSCRIPT

The United States and Cuba are taking another step toward restoring relations with each other Monday by reopening the Cuban embassy in Washington, D.C.

For the first time in 54 years, the Cuban flag is flying at the U.S. State Department as the countries work to normalize relations. Since 1977, the embassy building has served as an interests section for Cuba. (Via WRC-TV, CCTV America)

"This building used to be the Cuban embassy from the late 1910s until the early '60s. ... Since the late '70s, the building has been officially operated by Switzerland, but Cubans have worked inside. Now, everything will be official," WJLA reports.

The U.S. Interests Section in Havana will also begin operating as the U.S. Embassy on Monday, though a flag-raising ceremony isn't expected until later this summer. (Video via CNN)

President Obama announced a plan to thaw relations between the two countries in December last year.

"We will end an outdated approach that for decades has failed to advance our interests," Obama said.

Recent polls suggest most Americans are in favor of the move to reopen relations with the communist nation, though Obama's decision has drawn criticism from some in the GOP, namely Cuban Americans Marco Rubio and Ted Cruz. (Video via CBS)

"The White House has conceded everything and gained little," Rubio said.

"This is yet another tragic mistake. It is the latest manifestation of the failures of the Obama-Clinton-Kerry foreign policy," Cruz said.

While the countries continue to get cozy, the U.S.-Cuba embargo remains intact. Obama has asked Congress to lift the embargo, but neither chamber has acted on that.