US Announces Additional Sanctions On Venezuela 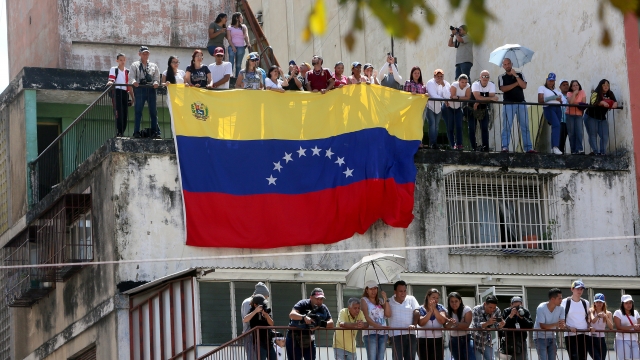 Vice President Mike Pence says the U.S. is imposing additional sanctions on Venezuela as the country deals with deadly protests and political unrest.

The sanctions will apply to more than 50 top officials and a state-owned oil company.

"In the days ahead as well, the United States will announce even stronger sanctions on the regime's corrupt financial networks. We will work with all of you to find every last dollar that they've stolen and work to return it to the Venezuelan people," said Pence.

He made the announcement after meeting with opposition leader Juan Guaidó Monday in Colombia. Pence also warned supporters of President Nicolás Maduro, saying those who choose to support him will "ultimately will be held accountable."

Maduro was sworn in for a second term in early January after a controversial election. Many consider the election illegitimate, in part because some of Maduro's opponents were barred from participating. Guaidó declared himself as the interim president shortly after the election and has been recognized as the country's leader by the U.S. and dozens of other countries.

The unrest between the two sides has turned violent, with at least five people dead and hundreds more injured. The U.S. has tried to deliver food and medicine to the country, but Maduro's forces have blocked trucks from entering, even setting two trucks on fire.

"Just days ago, as the world watched the tyrant in Caracas danced as his henchmen burned truckloads of food and medicine and murdered civilian  s," said Pence.

Pence says the U.S. will continue to try to deliver more aid to the people of Venezuela. His remarks echo that of Secretary of State Mike Pompeo. During an interview on CNN's "State of the Union" Sunday, he said "Maduro's days are numbered."

"The American taxpayers provided several hundred metric tons of food, supplies, medical kits, hygiene kits that we've delivered to Brazil in Curacao and Colombia, trying to get it to the place that it is so desperately needed. That was our objective yesterday, it's our objective today, it will be tomorrow as well," said Pompeo.