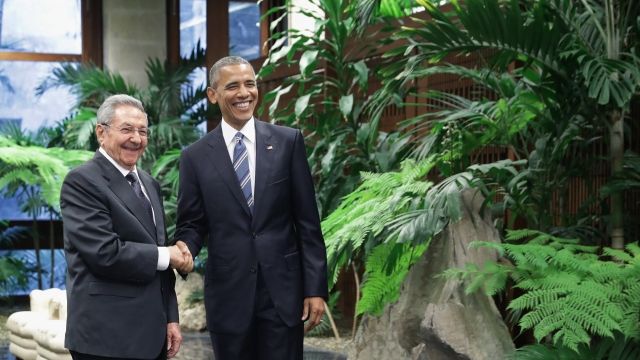 For the past 25 years, the United Nations has voted on a resolution calling for an end to the Cuba embargo. Until 2016, the U.S. always voted no.

For the first time, the U.S. didn't vote against the United Nations resolution calling for an end to the Cuba embargo.

For the past 25 years, the U.N. has overwhelmingly voted for the U.S. to end its economic, commercial and financial embargo on Cuba that started in 1960.

In recent years, the other country to vote against ending the embargo was the U.S.' close ally, Israel. In 2016, Israel also followed our lead and abstained from the vote.

Clearly, those votes didn't have any practical impact on the embargo. But sitting out the U.N. vote is just the latest change in the U.S.' attitude toward Cuba.

SEE MORE: Good News, US Citizens: Cuban Cigars And Rum For Everyone! (Kind Of)

The tide started to turn in 2014 when President Obama announced the U.S. would restore diplomatic relations with Cuba.

Since then, changes to the embargo include opening a U.S. embassy in Havana, resuming commercial flights to Cuba and easing restrictions on what Americans can bring back from the island nation.

"Abstaining on this resolution does not mean that the United States agrees with all of the policies and practices of the Cuban government. ... We have found a way to discuss these issues in a respectful and reciprocal manner," Power said during her speech to the U.N. General Assembly.

The Obama administration supports fully lifting the Cuba embargo, but that is up to Congress.