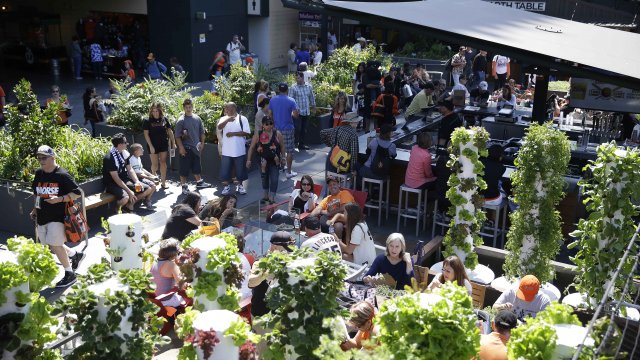 The United Nations Agriculture Organization estimates a billion people globally are now involved in some form of urban agriculture.

People have been growing food in cities as long as people have lived in cities. They’ve kept small livestock, raised bees and grown food in small plots of land all over the world, mostly because they’ve had to, according to Danielle Nierenberg.

Nierenberg is the cofounder of Food Tank, a non-profit organization that is pushing for food system change.

In the U.S. over the past 25 years, urban farming has become crucial in helping alleviate a phenomenon known as food deserts, where grocery chains began pulling out of inner cities and residents had fewer and fewer means of acquiring fresh produce.

“Those cities that lost grocery stores and other ways to acquire food or have access to affordable food, those were policy changes that were made that were, you know, inherently racist in many ways, and they kept food from people of color in underserved areas,” Nierenberg told Newsy Tonight.

“And because people are resourceful and because they had to … urban farms, community gardens started cropping up in places like Detroit or St. Louis or Los Angeles,” she added.

The urban farming movement may have started out of necessity in some cities, but it’s now thriving in Detroit, Seattle, New York and many other areas.

Florence Nishida is a master gardener and the co-founder of LA Green Grounds.

She and her team of volunteers started a trend in South Central Los Angeles over 10 years ago, nicknamed edible lawns, where Nishida and a group of volunteers helped turn yards into gardens.

Nishida said that prompted her to look for ways to help get fresh produce into the inner city.

Growing gardens in urban yards, vacant lots or on roof tops can expand choices for people, and there are other benefits as well.