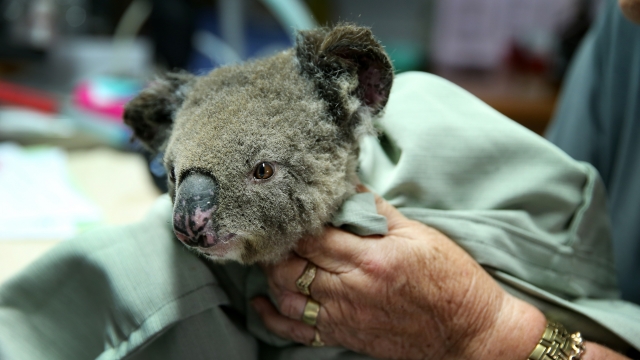 SMS
Fires May Have Killed Up To 30% Of Koalas In One Australian Region
By Ahmed Jawadi
By Ahmed Jawadi
December 27, 2019
​Australia's environment minister said as many as 30% of the koalas in New South Wales' mid-north coast region may have died in ongoing bush fires.
SHOW TRANSCRIPT

Nearly one-third of koalas in Australia's New South Wales region may have been killed since the country's bush fire crisis began.

When asked during an interview on Friday how many koalas have died in New South Wales' mid-north coast region, Federal Environment Minister Sussan Ley said, "It may well be up to 30% of the population ... because up to 30% of their habitat has been destroyed." She added, "We'll know more when the fires are calmed down and a proper assessment can be made." Ley also said the government is working with koala experts and has allocated $6 million toward building new corridors to release koalas that were saved from the fires.

Massive bush fires, fanned by strong winds and a record heat wave, have been burning out of control across Australia for more than two months now. Nine people have died, more than 950 homes have been destroyed and more than 12 million acres of land have been burned nationwide since.