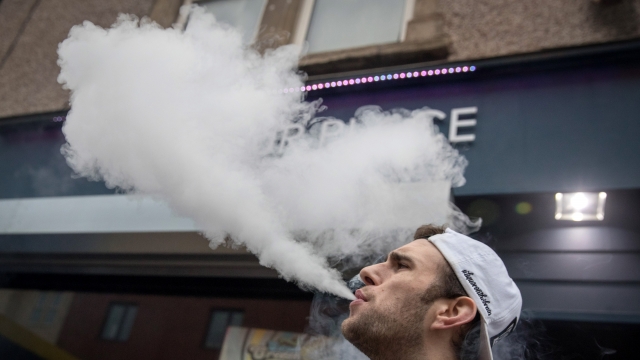 SMS
Why The Trump Administration Can't Regulate Marijuana Vapes
By Kellan Howell
By Kellan Howell
September 13, 2019
Hundreds of people have fallen ill after using vaping products. Now Trump is banning flavored e-cigarettes, but he can't do anything about weed vapes.
SHOW TRANSCRIPT

The Trump administration is calling for a ban on flavored e-cigarettes after hundreds of people got sick after vaping. But they can't do anything about marijuana vaping products, which officials say were used by many of the patients being treated for lung illnesses.

Because marijuana is still illegal at the federal level, the Food and Drug Administration has no regulatory authority over these products. That means manufacturers and states that have legalized marijuana in some form, are left to regulate the products themselves, and black market vapes are completely unregulated.

Officials say most of the patients reported using vapes that were purchased off the street.  However one death has been linked to a cannabis vape purchased at a legal dispensary in Oregon.

Now, marijuana advocates are calling on lawmakers to legalize cannabis so that federal regulators can have more oversight over marijuana vaping products.

Morgan Fox, a spokesman for the National Cannabis Industry Association told Newsy "We really want the federal government to be able to provide guidelines to help states regulate this substance and to make sure that any states that already have legal cannabis programs or any that are going to be instituting regulations in the near future will be able to develop the best programs possible in order to ensure public safety."

Both the NCIA and the Cannabis Trade Federation issues guidelines to lawmakers and vape manufacturers this week, including removing marijuana from the list of federally controlled illegal substances and regulating it; encouraging licensed vape cartridge makers to stop using oil additives that have been linked to the lung illnesses; and urging retailers to voluntarily recall any products that could contain those additives.

Retailers in Oregon have already started removing some vaping products from dispensary shelves. And regulators in Massachusetts are considering a measure to require marijuana companies to list ingredients in vape cartridges.

Meanwhile, vaping industry experts say a ban on flavored e-cigarettes would push more young vapers to the black market, putting them at a higher risk of getting sick.

"If you ban flavors, you are creating a potential multi-billion dollar black market for these products, because many vapers and many young people are not going to just say, 'Oh I can't buy it at the 7/11, so I'm done,'" said Gregory Conley, president of the American Vaping Association. "No, they are going to try to mix their own liquids, which could result in using an oil-based food flavoring that could cause lipoid pneumonia. They are going to go on the internet, go through social media, go through eBay, which the FDA has done nothing about and so, prohibition is not going to work."