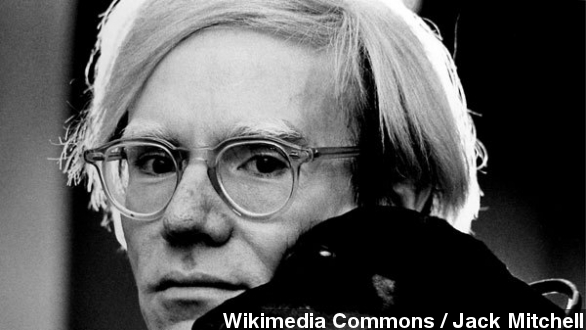 SMS
Unpublished Andy Warhol Works Found On Floppy Disks
By Kristian Mundahl
By Kristian Mundahl
April 24, 2014
The art was saved to Amiga 1000 floppy disks in 1985 after Warhol was commissioned to use the computer by Commodore International.
SHOW TRANSCRIPT

​Pop art icon Andy Warhol, known for his colorful Campbell’s Soup cans, was one of the first artists to experiment with art on computers. And now a team of computer scientists has learned Warhol’s P.C. period is larger than previously thought.

The disks worked on the Commodore Amiga 1000, a computer released around 1985. It was popular in Europe and known at the time for its advanced graphic technologies.

So advanced, in fact, that Commodore commissioned Warhol to use its machines for his creations, and in 1985, let him demo the Amiga before its debut.

HAGER: “You’ve found it to be very spontaneous, haven’t you?”

And it’s all thanks to this YouTube video that Warhol’s new works were brought to light. As the story goes, artist Cory Arcangel saw the video in 2011 and asked the museum to check the disks.

Without the technology to read the obsolete files, the museum waited until this year when it got the help of the Carnegie Mellon University Computer Club.

So what does the new art look like? Well, it’s no surprise there’s a soup can involved, but researchers also discovered a three-eyed rendition of Sandro Botticelli’s "The Birth of Venus." According to The Andy Warhol Museum, Warhol embraced the Amiga as an art tool, writing: "Warhol saw no limits to his art practice. These computer-generated images underscore his spirit of experimentation and his willingness to embrace new media."

And Ben Richmond at Motherboard agrees. "Warhol of course always seemed like he'd be a natural for digital art: it's endlessly reproducible, it's new and experimental, and one can imagine his wry take on the 'everyone's face is everywhere' ubiquity that computers facilitate."

And as Arcangel says, "We can see how quickly Warhol seemed to intuit the essence of what it meant to express oneself, in what then was a brand-new medium."

An exhibition based on the discovered art will premiere in Pittsburgh May 10.